Here you will find news relevant to the activities of the initiative including webinars, talks, consulting projects, publications, participation in conferences and meetings mostly relevant to resilience of critical infrastructure with emphasis on transport and energy assets and their intra/interdependencies, views on the UNs Sustainable Development Goals and use of digital and emerging technologies in infrastructure risk-based management

New paper in the Science of The Total Environment

Happy to see our new paper published in the Science of The Total Environment available online here ! In this paper we have developed a novel and detailed framework for the resilience assessment of critical infrastructure exposed to a multiple-hazard environment, which is applied to a case study of a transport asset.

The framework classifies multiple hazard sequences considering their nature and impacts, and accounts for (i) the robustness of the assets to hazard actions, based on realistic fragility functions for individual and multiple hazards, and (ii) the rapidity of the recovery, based on realistic reinstatement and restoration models after individual and multiple hazard events. It provides useful insights for the resilience-based design and management of infrastructure throughout their lifetime, leading to cost savings and improved services! 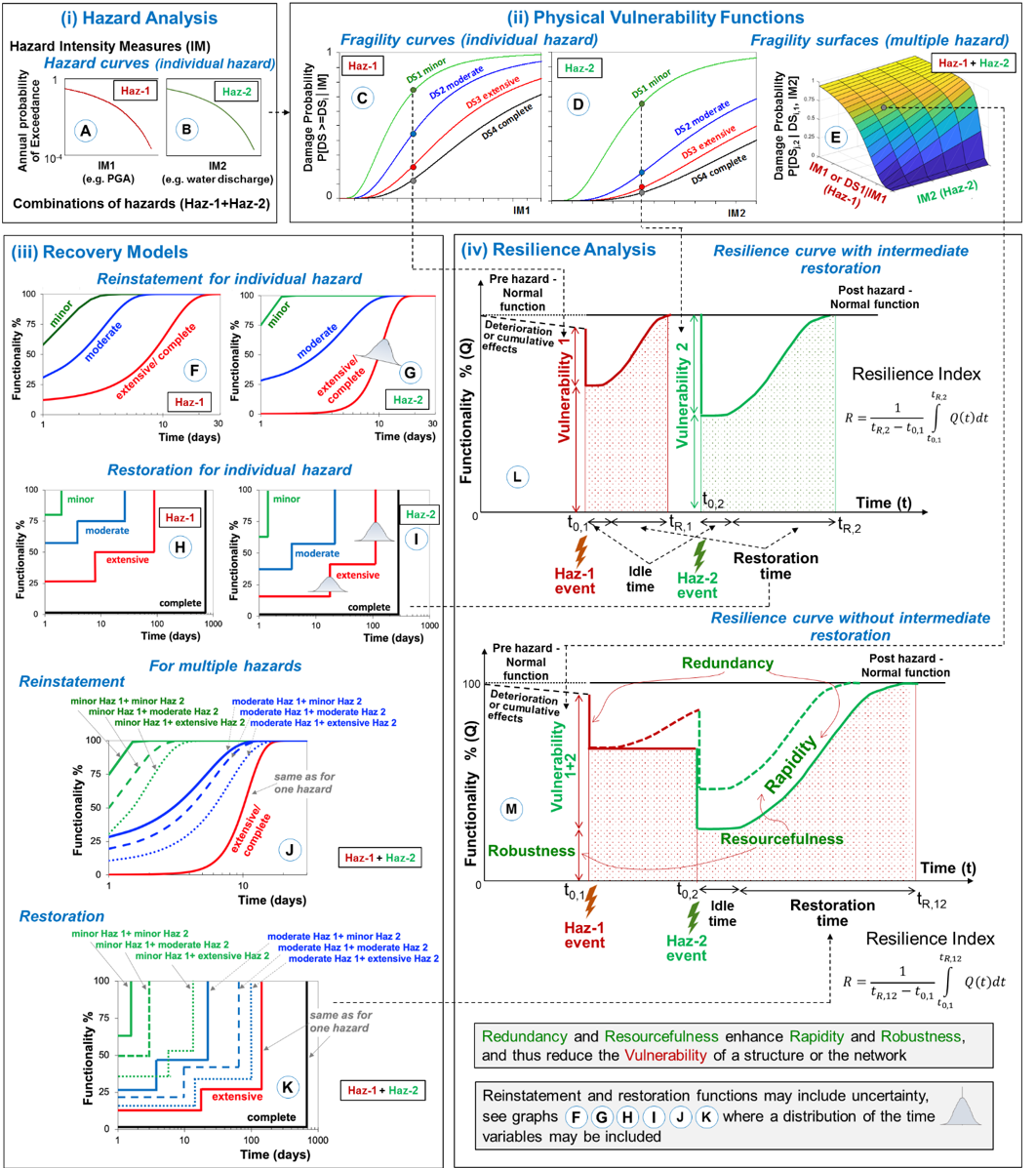 First event on resilience for 2020: Resilience First’s briefing, in partnership with Resilience Shift funded by Lloyd’s Register Foundation, on “Lessons learned: improving resilience in the utilities sector“, hosted by ARUP London. A very interesting brainstorming with representatives from electric power, water and transport networks. Utilities and infrastructure sectors must bring academia, business, communities and stakeholders together in order to build and enhance resilience. The  infrastructuresilience group was there! 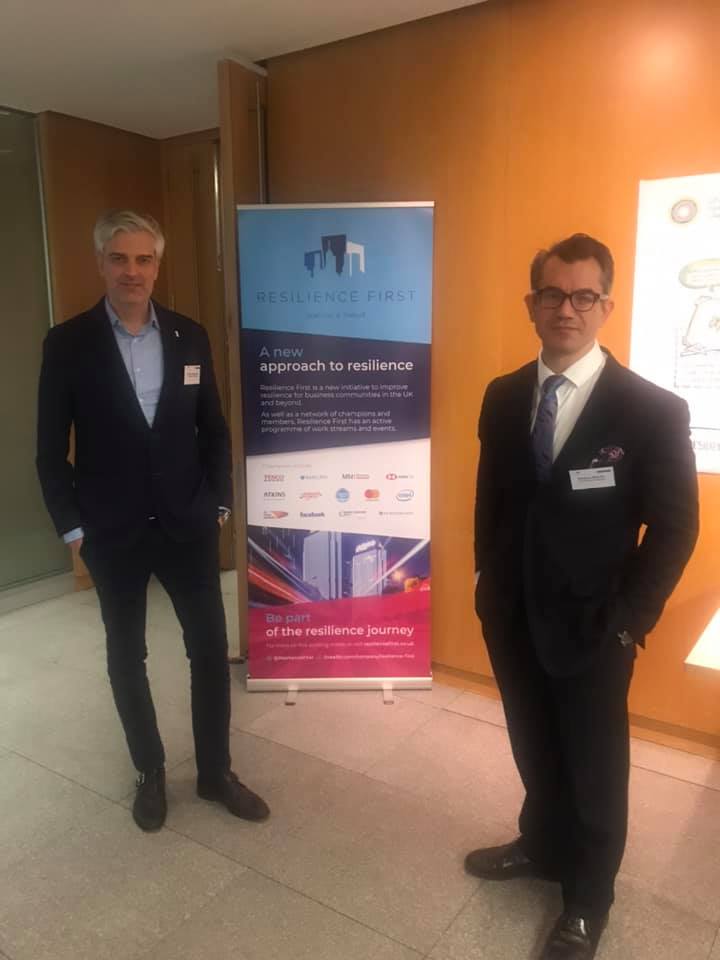 We just won a research grant from Innovate UK and this will open-up a new collaboration with Prof Mike G Winter, who is the CEO of the SME Winter Associates Limited. The title of the project is: Novel risk analysis tools for transport infrastructure exposed to geohazards, which is  a continuation and expansion of the TRANSRISK project.

The objective of this project is to deliver for the first time in the international risk assessment procedures, a practical tool for performing risk analyses for transport infrastructure (highways, railways) exposed to geo-hazards, including debris flows, rockfalls and avalanches.

Inspection of the landmark Polyfytos Lake Bridge of Servia, Greece

Inspection of the landmark Polyfytos Lake Bridge of Servia

The Lake Polyphytos Bridge or the Servia / Neraida High Bridge is the second longest bridge in Greece, with a length of 1,372 m designed by XEKTE SA and Prof Riccardo Morandi. Construction began in 1972 along with the artificial lake and was completed in 1975. The bridge has similarities* with the structural system of the Ponte Morandi (Polcevera Viaduct) that collapsed on 14 August 2018 in Genova.

The involvement of the infrastructuResilience group

After invitation from the regional Governor of Western Macedonia – Greece, a visual inspection of the landmark Lake Polyphytos Bridge (Greek: Γέφυρα της λίμνης του Πολυφύτου) at Servia, Kozani had been conducted with the Governor of Western Macedonia and his consultants in early January 2020. The #infrastructuResilience of the university of Surrey was there to offer consultation and opinion on the significance of what was told to be a vertical displacement of the deck, mainly along the part of the bridge that was constructed by the balanced cantilever method. The visual inspection revealed large vertical displacements of the balanced cantilever spans of the bridge, and thus urgent preventive measures were considered to be appropriate and taken at this stage. The measures are aiming at mitigating the risk of failure of the landmark and safeguarding the safety of end-users and citizens. The urgent measures are twofold: 1) reduction of maximum vehicle load and maximum speed and 2) connection of the Gerber simply support 40 m-long spans with the 30 m long cantilevers of the bridge. The first measure aims at reducing the load and the second will reduce the risk of having the Gerber beams unseated. However, the reduction in the risk is very small as the main issue seems to be the vertical deflection of the cantilever downward, and this is the main conclusion of the inspection, whilst the reduction of the maximum vehicle load and speed seems to represent a very small portion of the total load of the deck. The photographs below show left: a view of the bridge (from Kozani to Servia), middle: the visual inspection, right: the problem as confirmed on site.

* The similarity is the use of Gerber simply supported spans on cantilevers. Also, the understanding is now that the preliminary interview, on 15 August 2018, one day after the collapse of the bridge (see Stergios’s BBC interview here) has provided a relatively accurate comment: “…some environmental factors may have caused this bridge to deteriorate early… rust can be seen at the top of the tendons” is in accordance with the detailed research published 16 months later by Calvi et al. (2019): “The loss of a stay seems to be the final cause of collapse…The possible initial cause of the collapse may thus be related to fatigue problems in the tendons near the tip of the antenna, or by deterioration of the connection between stay and transverse link.” The latter raises concerns with regard to the design of the system of protection of the tendons adopted by professor Morandi.

Polyfytos Lake Bridge of Servia in the media

In continuation to Stergios involvement with the High Bridge of Servia (Polyfytos Lake Bridge),  Stergios will be talking to the national tv channels ERT1 (14 Jan, after 7am-GR time) and ERT3 (14 Jan, after 11am-GR time) analysing “what’s next” for this landmark bridge of high importance and how this affects the resilience of the network, the region and beyond. 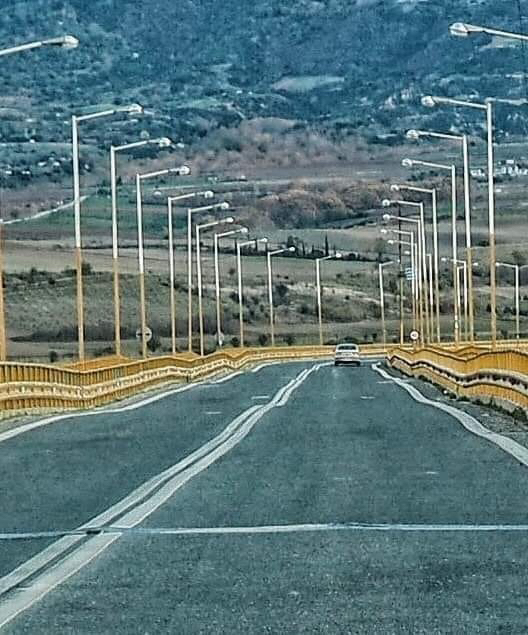 best wishes from the infrastructuResilience group! 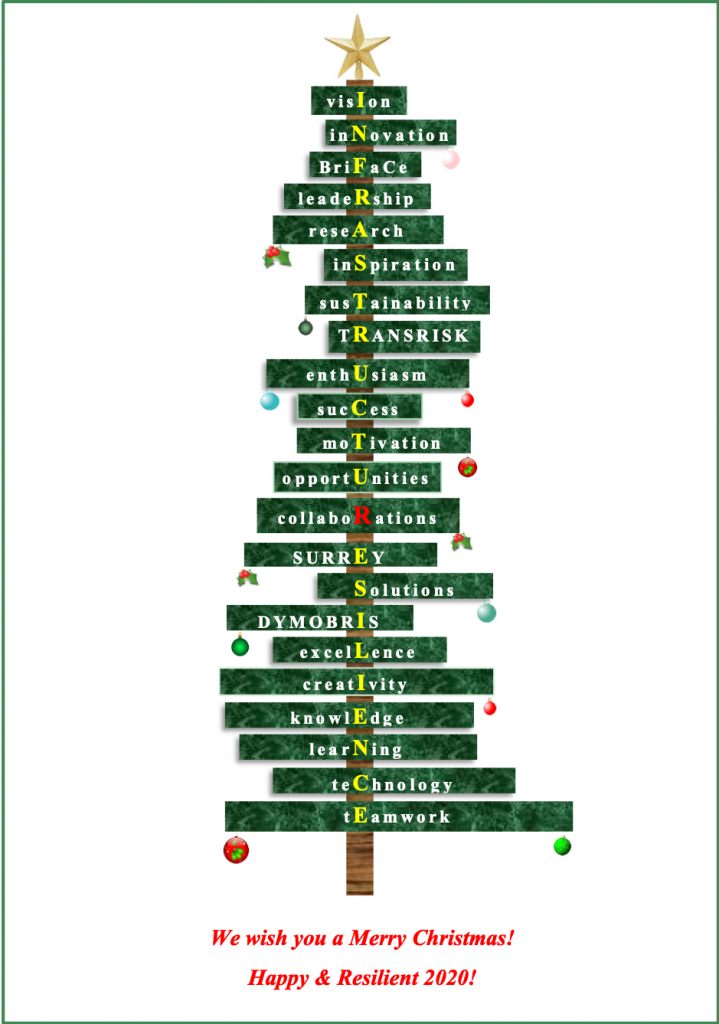 Stergios participated today in the examination of a PhD dissertation at Imperial College, on the design of externally prestressed timber bridges. Very interesting topic and impressive work. Thank you Christian Málaga-Chuquitaype for the invitation. 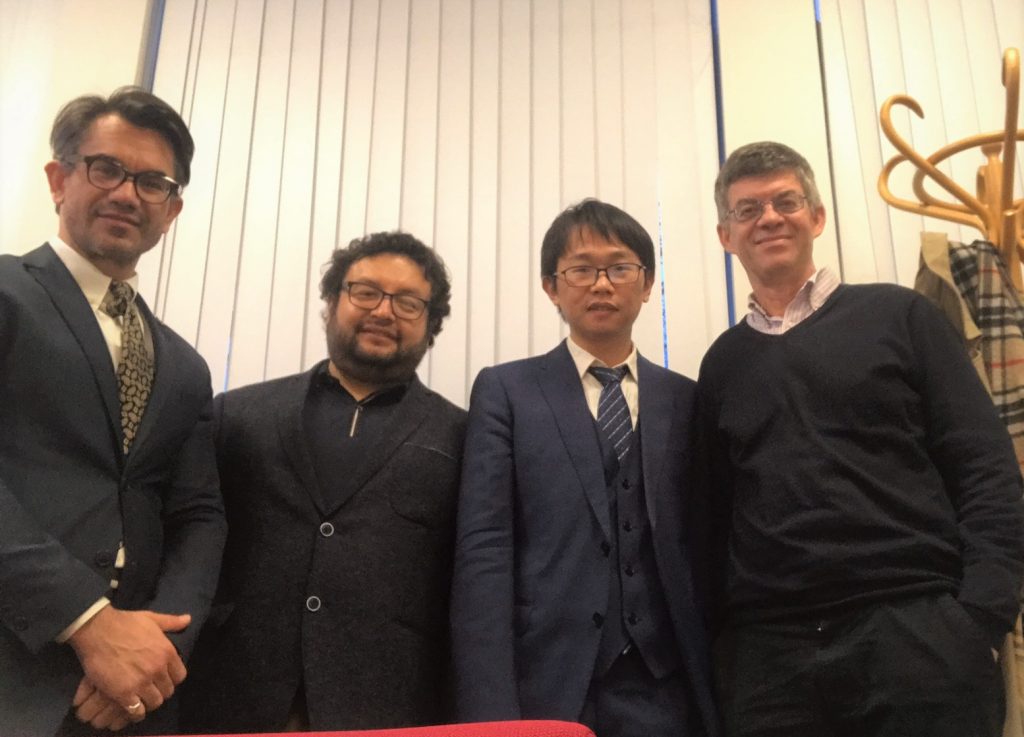 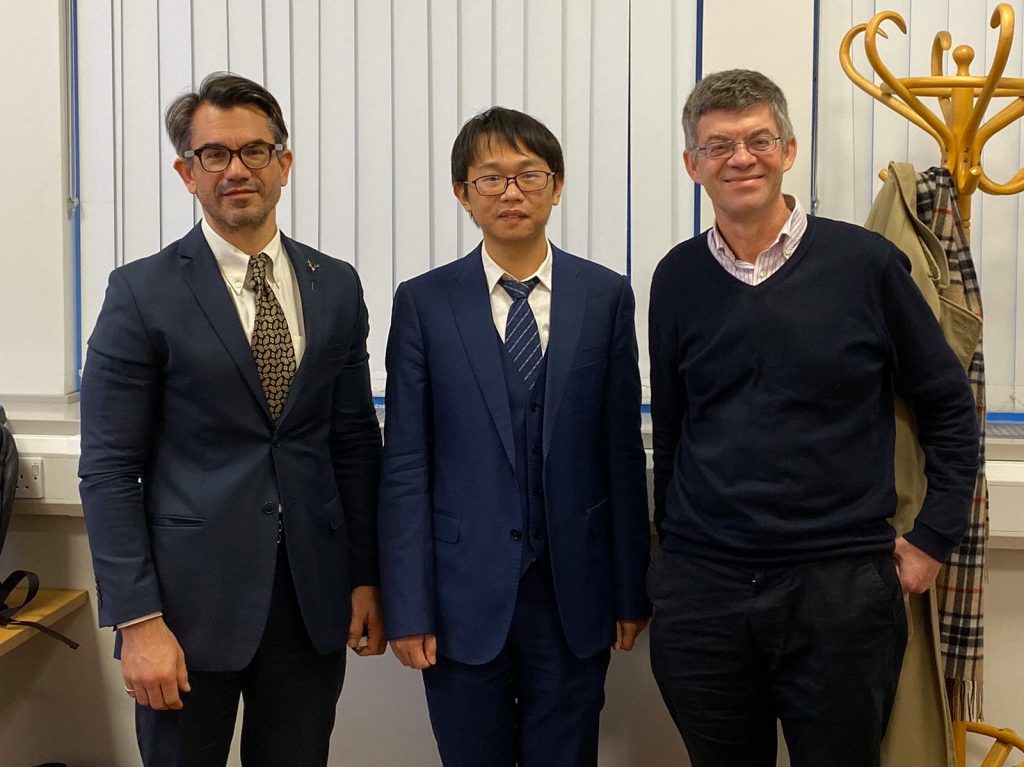 We participated in the 4th meeting organised on the 3rd of December by Highways England, on “University research – highway structures – hydraulic actions & extreme weather events”. Together with researchers from the University of Southampton, University of Strathclyde, University of Exeter, University of Bristol and representatives from Network Rail, JBA Trust and Highways England we discussed how new research developments on risk and resilience assessment, monitoring systems and experimental methods can be used to improve the transport assets management and support the decision-making against hydraulic hazards.

If you would like to attend the training course of the Institution of Civil Engineers (ICE): Risk and Resilience of Bridges, please register in the following link (you can use the discount code RISK10 when you get to the purchase page to receive a 10% discount): https://www.icetraining.org.uk/Courses/Bridge-Engineering/Risk-and-Resilience-of-Bridges-and-Networks